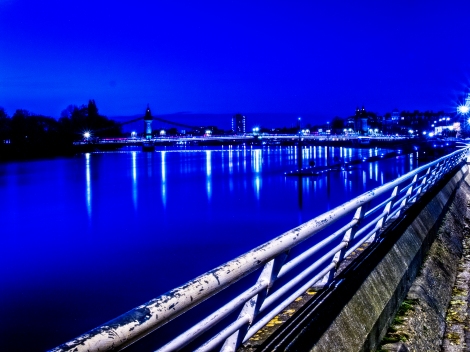 Continuing with last weeks blue hour shoot this is another view of Hammersmith Bridge in South West London taken from the North East between Hammersmith and Fulham. The Harrods Furniture Depository featured previously is on the opposite bank. There were a few issues while taking this shot, primarily from the very bright street lights along this stretch of river meaning I needed to reposition a few times to avoid light spill and lens flare.

I shot a series of RAW brackets (5 in total) using the camera histogram to determine the amount needed and stopped the lens down to f22 to get the starburst on the lights.

Once home and downloaded, I adjusted colour temperature to ensure the railings in the foreground and the lights retained their white colour, this threw a blue cast over the rest of the image which I quite liked.

Into Photomatix and the 5 images were combined into a tonemapped TIFF. This was then opened in Photoshop and a few passes made through a noise filter, before some level adjustments and localised contrast and blur / sharpness applied.

All images on this blog are © Chris Maskell, unless otherwise stated. DO NOT USE OR REPRODUCE WITHOUT SEEKING PRIOR PERMISSION.

A Brief Moment in Time

Selected images on this site are available to purchase as single use downloads or high quality prints.
If you are interested in using any images for commercial purposes please make contact in advance to arrange terms.
I am also available for commercial, event and portrait photography.